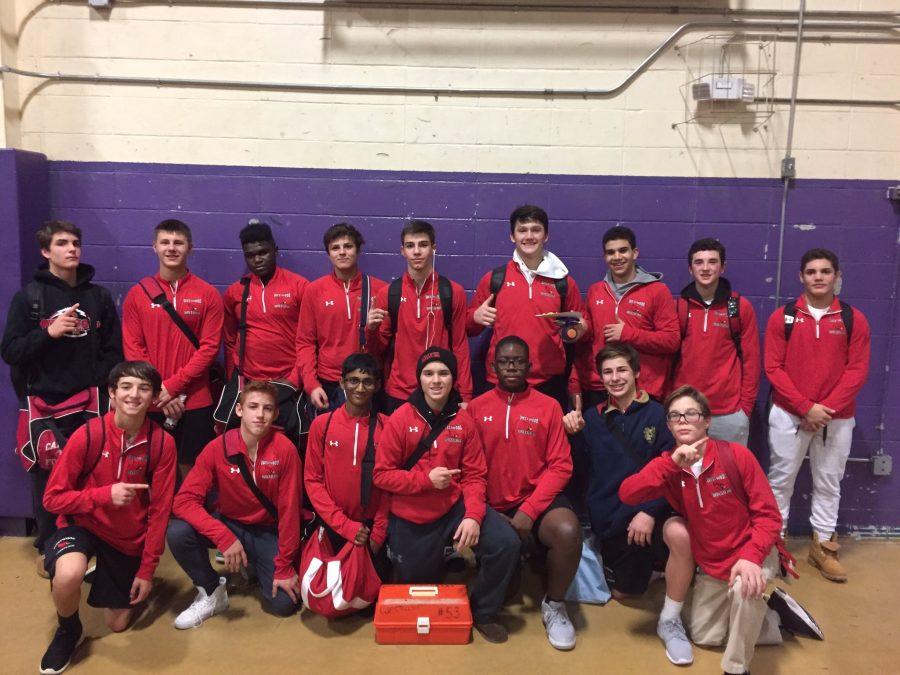 Sports are a huge part of some students lives here at Westwood. In the winter season, we have many different sports and teams competing. There is boys and girls basketball, wrestling, competition cheer, track, ice hockey, swimming and bowling. Even though it is only half way through the season for some and the start to others, student athletes here are accomplishing some great things.

Boys basketball has already played eight games in their season, currently holding a 5-3 record. They have a huge event and a game coming up this Saturday, January 14. It is a game against Leonia which they call Cards vs. Cancer. It is a fundraiser where the team raises awareness for different cancers and patients. Every year they honor a different person battling cancer; this year the team is honoring Natalie Lopac. Lopac is a Freshman in the Westwood community who is struggling with bone cancer. The boys JV team played at 11:30 a.m. followed by Varsity then, the annual alumni game. Senior Tyler Woodward is extremely excited for his final season as a cards basketball player: “I think we are going to have a great season as a team as we continue to develop and learn to play together.” Woodward explains.

Bowling is having an extremely good season this year, they are conquering the Patriot  league with a 7-0 record and are one of the teams to beat. Wednesday, January 11 the team has a big match against the Paramus Catholic. Senior Gabby Stellacci is extremely excited to finish her bowling career here at Westwood “I think the season is going well, we placed third place for a FDU tournament which wasn’t expected,” Stellacci says. The team is expected to win the Big North league.

Wrestling is also having an astonishing season, holding a 5-0 record in their big north patriot division. The team is looking toward winning the league title this year. Senior lone captain  Sean McKay is excited to be on top during his senior season “ We can even make it to state sectionals which we can very much win this year.” says McKay. The Wrestling team has a big match coming up January 18.

Our hockey team is joined with River Dell. The hockey captains this year are all from Westwood:  Eddie Dahdah, Joey Ragno, Jackson Henig and Matt Ajello. This year the team is holding a 10-3 record. January 11, the team had a huge counties game, after two consecutive losses; they came out with a win. The team is now advancing to the second round of counties. January 14, this Saturday the hockey team has a huge game vs. their rivals, Paramus Catholic. Captain Eddie Dahdah believes in the team this year “We have been doing pretty well so far and we have been up some of the top teams in the state.” says Dahdah. Everyone on the team is excited for the season Senior captain Joey Ragno agrees, “We would really like to make it to the state tournament and win the first round. That would be great.” says Ragno.

Girls basketball is also having a undefeated season this year. The team’s record is 9-0. The senior captains this year are Samantha McClutchy and Mackenzie Dougherty. Senior Olivia Cassidy is excited for her senior season. “Due to our record, we are feeling extremely confident, but that doesn’t mean we get to stop working hard. We have to take every game seriously, no matter what team it is, and I think we’re going to continue with our undefeated record,” explains Cassidy.

The competitive cheerleading squad just competed in their first competition of the season. They placed second in their division and fourth in the overall competition. The senior captains of the competition team are Julia Pampin, Emme McCarter, Kelsey Bross and Laura Divino. This past weekend they had three different competitions and came in second place at both Hackensack and Saddle Brook, losing by a very narrow margin in both locations. Senior captain Julia Pampin explains, “We are progressing steadily and the season is looking bright.”

For swimming, the boys team has had the best season in history. The team is currently holding a 7-2 record. The captains of the swim team are Aiden Vella and Tommy Damato. Their next meet is next Saturday, January 21.  Aiden Vella says “We have been notoriously bad the past few years, but were currently at a good standing.”  The swim team also has a fundraiser coming up Tuesday, January 24. Between 4:00 p.m. and 9:00 p.m you can go to Chipotle in Paramus and 50 percent of your bill will be donated to River Dell/Westwood swim team. Make sure to tell the workers or show them a flyer to support the fundraiser!

The winter track team is also doing well right now. At the Big North Championship on Monday, January 16, the team performed well again with the boys coming in first in the 4 x 800 relay.  They also have the county relays at the Armory Track Center. Senior Natalie Dahdah says “We have been doing really well this season and hope to continue this path in upcoming meets.”