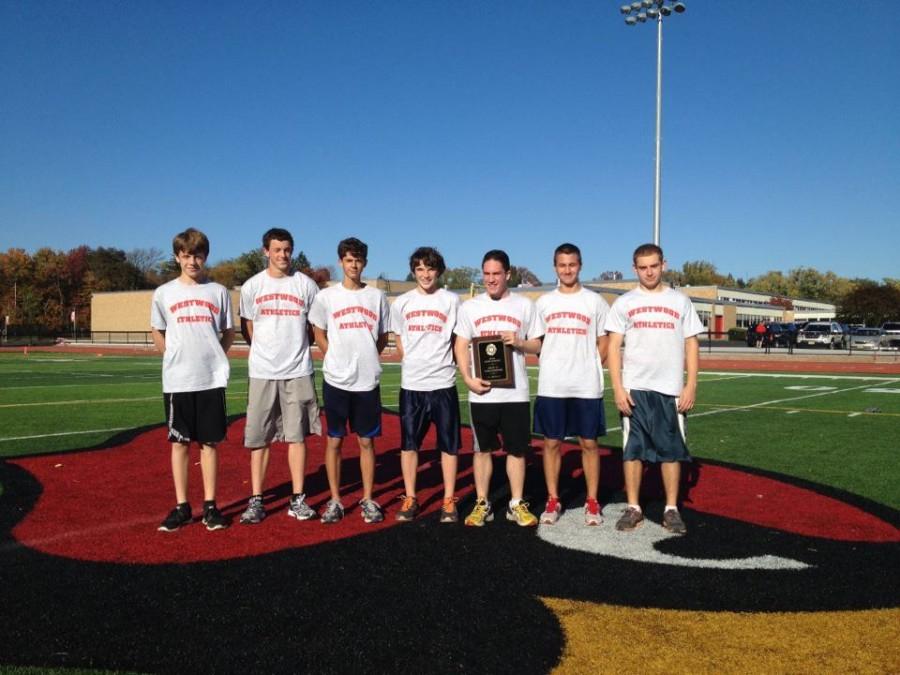 The Westwood Boys Cross-Country Team won first place at the County Championship meet on Saturday, Oct. 20 at Darlington County Park in Mahwah. This major accomplishment is the result of a long season of hard work.

The varsity team beat out Glen Rock by two points, resulting in a close 86-88 win. “I like close victories,” said head coach, George Glover, after the final scoring was announced. “It means that every person mattered.” This is the first time the Westwood boys have won the county title since 1997, fifteen years ago, and they felt the pressure. “We laid it on them and told them, ‘This is your best chance,’” Glover said. The boys placed third at their league meet a week earlier, placing behind Ramsey and River Dell.

A varsity race is a 5k—approximately three miles. At Darlington Park, this involves running through sand, woods, and up hills. The Division C race in which Westwood ran included about 80 runners from 11 different towns. Cross-Country meets are scored by place, so lower scores are better. A full team is comprised of seven runners, the top five of which can place. The final two are just as important, as they can take up places that would have otherwise belonged to another team. Westwood’s varsity runners at counties included seniors Jimmy Lewis and Nick Schroeder, junior Paul Antonick, sophomores Ryan Dritschel, Noah Osterhus, and Kyle Florio, and freshman Jake DiCuffa.

The road to the county meet has not been the easiest. “We were in a tough division this year,” said Antonick, who also placed third overall at the meet. “We didn’t actually do that well in dual meets. But the teams that we raced were all really good, so it was actually better because we raced harder competition, and when we came here, we were prepared.” Not only did the team gain experience through racing tough competition at dual meets, but by traveling to New York on Saturdays to race their teams as well.

Glover attributes a large portion of the boys’ success to their attitudes throughout the season. “The boys work really hard to improve, and even though they weren’t the best in the beginning, they got a good thing going,” he said. “They pushed each other, they had a great attitude, worked out hard every day, and were positive about everything, and you could see that that was going to catch on.”

The team also showed a lot of improvement from years’ past. “A couple people graduated from last year. But everyone who came back from last year got a lot faster, and everyone got a lot better,” said Antonick.

The next step for the team is the Bergen County Meet of Champions, which will be on Saturday, Oct. 27. After that, they will go to the State Section meet, where the top five teams will qualify to move forward.

Glover is the head coach for both the boys and girls cross-country teams. The girls placed second place to Rutherford’s first, and junior Corinne Myers finished first overall. Because the top two teams qualify to move on to the Meet of Champions, both teams will be moving forward, and the girl’s team, who has a tradition of success in both cross-country and winter and spring track, is just as determined to succeed.

In terms of the next few years, Glover is optimistic. “We’re only losing two seniors this year, and we have a full freshman team, which we’ve never had before,” he said. “There’s going to be a lot of material to work with, so I think it’s going to get even better.”