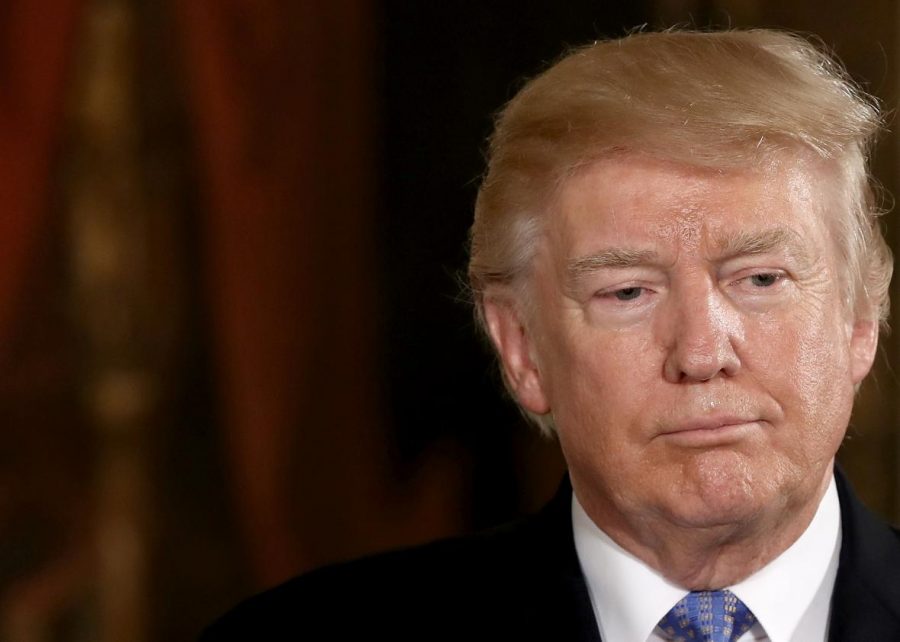 Sunday, September 24, 2017 will be looked at as a day of infamy through the eyes of President Trump.

But, to the nearly 200 NFL players, along with staff, personnel, and owners who dropped to their knee or locked arms in defiance to the president’s infamous, lunacy-ridden speech last month, where he referred to protesting players as “sons of bitches,” it will be looked upon as a day of triumph, persistence, and fellowship.

Two days after his inauguration, in the aftermath of the Women’s March, Trump tweeted at 9:23 a.m: “Peaceful protests are a hallmark of our democracy. Even if I don’t always agree, I recognize the right of people to express their views.”

What is gratifying is that the President understands that the right to protest, is in fact, a pillar of American democracy.

What is alarming, and rather sickening, however, is that the president cannot validate this peaceful protest because he does not agree with it, and believes it should be stopped. Trump is compromised by America’s greatest ill: selective freedom.

The racism that has become synonymous with Trumpism influenced Trump’s slimy motion to compare black football players–who have tried to create change for the better and initiate progress and healing in the communities that raised them–to dogs.

It influenced him to assume that Neo-Nazi groups and white supremacist organizations who rallied in the streets of Charlottesville screaming “Jews will not replace us!” contain some “very good people.”

It influenced him to create an air of xenophobia and cravenly build up an irrational fear of Muslims and immigrants.

It influenced him to pounce on Americans who do not hold a spiritual connection with the American flag, even though he did not transparently denounce the dissenters of democracy who wave high and mighty the Confederate flag. The Confederate flag is a direct insult to the liberty associated with the stars and stripes.

Trump lives in his own country. The mantra of the White House should be, “Ask not what Donald Trump can do for you, ask what you can do for Donald Trump.”

It is the central goal of the Office of the President to serve the American people and shine a light on, as well as offer guidance and leadership to, the problems that encompass U.S. citizens. However, Trump is doing the complete opposite of that.

With every ill-advised tweet, Trump strokes his ego and gives validation to the fact that his narcissism is life-threatening. The Twitter account of a president of the United States should be used to communicate to American citizens the daily administrative agenda. It should not be representative of a YouTube comment feed.

Trump has no moral game plan, and no governing game plan. He is a willfully ignorant child who is running a floundering administration, and its countless failures have provided a gateway for him to start an attention-hungry culture war.

The United States does not have a leader. This nation is compromised by a liar, a fool–a caricature of what a strong-willed person should be.

A strong leader would not condemn a protest he does not agree with.

A strong leader would not bat a blind eye toward the racial turmoil that plagues the country that he leads.

A strong leader would open his White House to be a center for civil discourse on how to combat the social issues that are being publicized by these athletes.

In President Trump’s America, allegiance is not pledged towards the flag. It is pledged toward Trump. Freedom is only reserved for the narrow, selective few who live and breathe his destructive ideology.

The United States does not preach loyalty to the flag, and that is a pillar of American democracy. True devotion to this country comes from the desire to moralize the immoral, justify the unjustified, and equalize the unequal. That is where raw patriotism is found.

Protest has the extraordinary capability to give life and power to the most depreciated in our country. We look back on the trailblazers of the women’s suffrage movement, the courage of Rosa Parks to stand up by sitting down, the optimism of the March on Washington, and the bravery of Tommie Smith and John Carlos at the 1968 Olympic Games. All of these peaceful protests have energized Americans to bat an eye towards the brokenness of our nation’s institutions when it applies to race.

But, for some reason, the kneeling protest has stimulated the nationalistic American to associate the act as a demur to the flag, the anthem, or the military. When Colin Kaepernick’s protest came to light in August 2016, he said he knelt during the anthem because “[he is] not going to stand up to show pride in a flag for a country that oppresses black people and people of color.”

As John Legend wrote it in an article for Slate, the protests are “an attempt to educate the public that criminal justice — mass incarceration, lengthy sentences, police brutality —  is the civil rights issues of our time.” The national anthem protest is in no way, shape, or form a disrespect to the flag or the military.

Sure, these players could find a better way to speak their mind and put their money where their mouths are. But, the kneeling and the fist-raising shows that they passionately care about the systematic injustices that demean and vilify the ideals glorified in the Constitution. It shows that they understand the trauma of a 10-year-old black boy on the Southside of Chicago whose father was wrongly killed by police.

It shows that they did not forget the communities that bred them and inspired them to create change. It shows that they stand with African-Americans who are constantly victimized for the color of their skin and are three times more likely to be killed by police than white people in a country that preaches “liberty and justice for all.”

Trump made the protest revolve around him to energize the racial id of his base who revels in the “truth” of his word. It may not seem like it, but Trump is a very smart man who very well knows what dumb people like to hear. He is the earpiece for the simple-minded, ignorant, and ill-informed–their “great communicator” of sorts. With every painstakingly worrisome day that the United States has to endure under this president, Trump has unintentionally diminished and eroded the humility and servility of the office he leads from.

President Trump is on his own suicide mission.