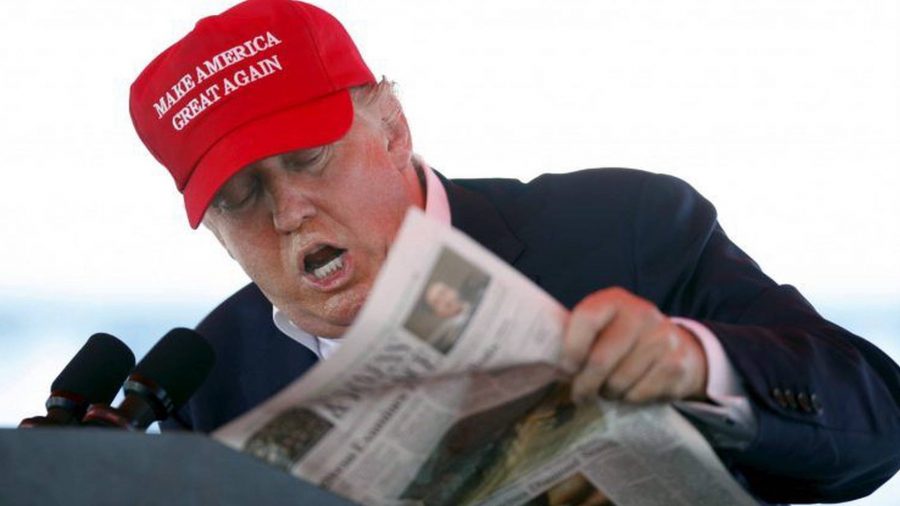 Take, for instance, the 37th President of the United States, Richard Nixon, who spent much of his ill-fated presidency chastising, smearing, and bombastically intimidating “enemy” journalists who attempted to challenge his administration.

Take, for instance, the reckless 45th President of the U.S., Donald J. Trump, who is spending much of his ill-fated presidency chastising, smearing, and bombastically intimidating “enemy” journalists who attempt to challenge his administration.

Seem familiar? It should, due to the fact that a demoralized President Trump has, through the first six weeks of his made-for-TV, “ready for primetime” presidency, bulldozed over the “very fake,” but truthful press, in a galvanizing attempt to undermine their legitimacy.

In a February 25 tweet, that was not much of a tirade, Trump declared that he will not be attending the annual White House Correspondent’s Dinner held on April 29, a glitzy, gaudy, and ostentatious carnival party that commemorates the world of journalism and the freedom of the press. You may remember the 2011 dinner when former President Barack Obama – in the midst of the operation that would kill Osama bin Laden – gleefully took apart the stone-faced, thin-skinned birther piece-by-piece, toying with “the Donald’s” earth-shattering decisions to fire D-list celebrities, such as Gary Busey or Lil Jon, on the “Celebrity Apprentice.”

Now as the president of the United States, Trump has the awesome responsibility of ensuring that his administration guarantees that the rights of a free press, enumerated so “bigly” that his baggy eyes can see, are fully protected to ensure that the American public receives news that is independent of governmental meddling. And do not forget, for this is a man who spent his entire pre-presidential adult life fixated on his image in the press, hobnobbing with Hollywood, tangoing with covers of New York tabloids, and greatly exaggerating his own success and golden, tacky-rich image by steering the pen of reporters.

Even so, Trump thundered in a sullen speech late-February at the Conservative Political Action Conference his claim that the press “shouldn’t be allowed to use sources unless they use somebody’s name.” Huh. Well, Trump in fact has a long and sleazy history of using fake names. The Washington Post reported last month that Trump would pose as a public relations man named John Miller to be the puppeteer of tabloid writers, in an attempt to spin stories in his favor regarding his affair with model Marla Maples and divorce from first wife, Ivana.

But that was New York, this is Washington D.C. The get-away-with-anything, in-your-face grandiloquent New Yorker who huffed and puffed his way into the presidency like the big bad wolf, has to realize that everyone is not going to be on his side. And he has to learn that especially with an iron curtain-like Washington press corps that does not exist to play Mr. Nice Guy. The press does not operate to be on the president’s side per se, but, instead, on the side of the American people.

Howard Stern, a fellow New Yorker and Trump confidant, said on his radio show last month that “[Trump] loves the press; he lives for it.” “He wants to be liked; he wants to be loved.”

Indeed, Trump loves the press and lives for it, and that is most likely the reason why he declares any news that goes against him as being fake. But when that love and adoration for attention, and, obviously, a “yuge” amount of notoriety comes with being the leader of the free world, metamorphosizes into a lingering battle for control and corruption, the egocentric president is fighting an inevitable bully that does not like to be tempted.

So, President Trump, with his image, his mojo, his gold-plated locks, his grandeur, and his celebrity, cannot flex his strongest muscles when he manipulates and lambasts the press for giving him something that he has always yearned for: attention.