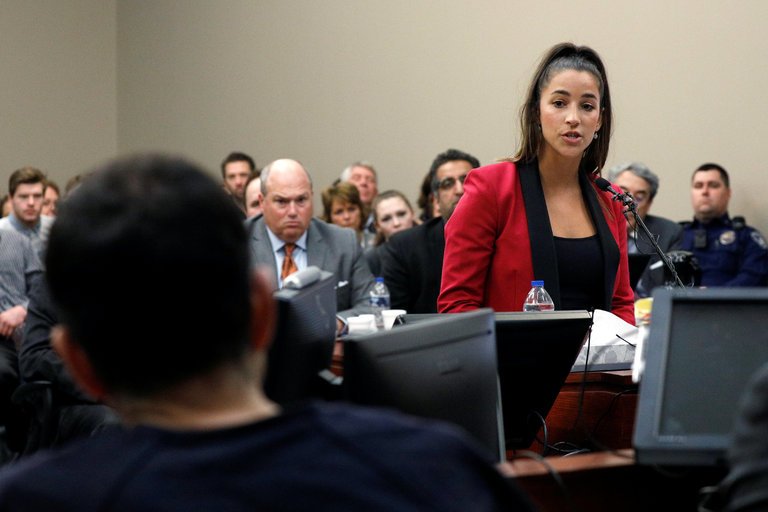 After over 160 women came forward to report sexual abuse, approximately 150 of the victims testified in a Michigan court against former olympic gymnastics team and sports doctor, Larry Nassar, 54, who pleaded guilty to seven counts of sexual abuse.

He received his sentence of 40-175 years in federal prison, as well as a separate 60-year sentence for child pornography. Among his victims were mostly gymnasts, along with dancers, rowers, soccer and volleyball players, and a figure skater. Nassar’s abuse has been occurring for about 20 years.

Nassar listened to victims’ statements in court for seven days, after which he apologized and described how hearing the statements have shaken him to his core. Rosemarie Aquilina, the judge on the case allowed for any victim to speak in court, specifically after Nassar had written a letter stating how painful and distressing it is to hear countless testimonies against him.

Some of the most popular names in US gymnastics have spoken out as victims of Nassar’s abuse. Gabby Douglas, Simone Biles, Aly Raisman, and McKayla Maroney have all come forward to reveal their experiences. Raisman’s testimony against Nassar in court went viral, being featured heavily in SnapChat News stories and other social media platforms. She also revealed that her former Olympic Gymnastics coach, John Geddert, knew about Nassar’s abuse and did nothing about it. He is now facing a separate criminal investigation.

The first victim to speak out, Racheal Denhollander, said that Nassar began his abuse in 1999, molesting her while her mother was in the room but positioning her so her mother could not see. Raisman revealed that Nassar began abusing her at the age of 13; she also described an instance on a flight to Tokyo during which Nassar drugged and abused her. Another member of the Fierce Five, McKayla Maroney, said that Nassar had also drugged her during the same flight, however, he took her back to his hotel room as well. Maroney said she thought she was going to die that night.

“You are so sick I can’t even comprehend how angry I feel when I look at you,” Raisman said to Nassar in her testimony. “I have both power and voice and I am just now beginning to use them.”

Many of the tweets and social media posts regarding the scandal have been labeled with the hashtag, #metoo. The movement began when actress Alyssa Milano came out about Harvey Weinstein’s sexual abuse this past fall. Since then, the #metoo movement has inspired thousands of people to share their sexual abuse stories, breaking the silence and advocating to put an end to sexual harassment.